Yesterday three emminent scientists, two from the US and one from Germany, Reinhard Genzel from the Max Planck Institute for Astrophysics in nearby Garching , were awarded this years Nobel Prize for Physics. Their contribution to the theory (Roger Penrose) and the identification and visualization of black holes in the universe (Andrea Ghez and Reinhard Genzel) were acknowledged.

The question arises what kind of matter a black hole is composed of, and does this matter at all ? 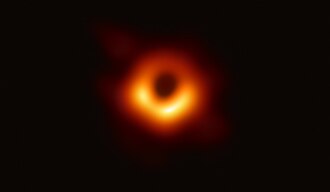 Matter we usually think of as something solid, something we can touch and which resists movement (inertia) and which is heavy of course (because all matter is attracted by gravitational force). But another, in fact much broader definition comes from Karl Marx, who also included Radiation, Energy and other fields in his category of matter (the objective reality that is given to man in his sensations, which is copied, photographed, depicted by our sensations and exists independently of them.

So what we know about black holes is that they are the source of extremely strong gravitational force. A black hole in the center of our galaxy (the milky way) exerts a gravitational force to the surrounding stars that is equivalent to 4.1 million solar masses M☉, or 8.2×1036 kg. Its diameter is calculated as 3 x 10(x10) km, as compared to the suns diameter of 1.4 x 10(x6) km. Because of this, its density (which is responsible for inducing curvature of the space-time) is roughly 7 x 10(x13) times higher than the average density of the earth. There is element that we know which under normal conditions can be as dense. A sugar-cube size piece of this black hole would weight 56 million tons. This is similar to the mass density of an atomic nucleus. But there, the size is limitted to the radius of the largest transuranium elements, about 10(x-15) m, and it is believed that all nuclei that exceed this limit become unstable and fision.

A black hole of similar density is not only stable, but it even happily increases in mass and size. In my view, other candidates for the type of black hole matter are free quarks, isolated Higgs bosons or pure energy. Since according to Einsteins mass-energy-equivalence, pure energy of sufficient density would also excert a strong gravitational force.

But do black holes matter at all, or are they just an object for scary movies and academic research ?  No, I think they matter a lot.  Perhaps its a black hole which by its strong gravitational force keeps the milky way (our universe) together.

Posted by radius at 5:20 PM No comments:

Money cant by me health 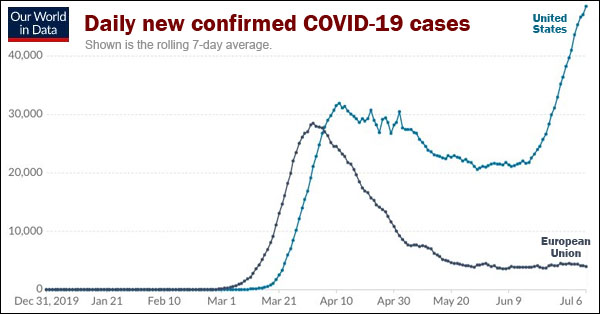 Yesterday the 2020 Nobel Prizes for Physiology/Medicine were announced. This year, three scientists who contributed to the discovery of Hepatitis C virus shared the award to equal parts. Harvey J. Alter, born 1935 in New York worked at the NIH Bethesda, Michael Houghton, born in 1949 in the UK works at the University of Alberta and Charles M. Rice, born 1952 in Sacramento, CA is researcher at the Rockefeller University in New York. The success of anglo-american bio-medical basic research is again reflected by the decisions of the Nobel Price committee, and there is little reason for doubts about the justifiction of their votes. It is, by the way, also reflected by the number of high-class publications, patents, discovery of novel therapies.

What is deeply disturbing, though, is the fact that despite the high level of basic research in medicine and biology in the US, their record of fighting the SARS-CoV2 pandemic is desastrous. Whereas the US makes up only 4% of the world population, it is responsible for about 20% of all SARS-CoV2 infections and the same percentage of coronavirus fatalities (as of today, the record of deaths shows 210.195 in the USA and 1.044.311 worldwide). During the last 10 month, 1 out of 1522 Americans died of the virus, as compared to "only" 1 out of 7469 people worldwide. The comparison becomes even more weired if you compare the death rate in the US with some countries which, despite limitted ressources for research, managed the corona-pandemic in much more planned and rational way. This is the Top-10 list of countries which achieved the lowest numbers of lost lives (relative to the population size):

CONTRY       CONFIRMED DEATH DUE TO SARS-CoV2 (per population)

What makes these numbers even more confusing, and puts the poor record of the US death toll in an even worse light is the fact that the East-Asian countries like China, South Korea or Singapore were among the first confronted with the virus outbreak. In the US, the infectious spread started almost 6 weeks later, therefore the authorities theoretical had a huge advantage of preparing the right measures of preventing the spread. But little benefit was gained from this natural advantage. The risk of dying of SARS-CoV2 in the US is about 200 times higher than in any of the East_Asian countries. And it is not a different population structure that can be blamed for this: All these countries and not agricultural any more, but dominated by large urban settlements and people working and big enterprises.

Some scientists suspect that certain genetic variants in the genome of East-Asians confer a protective effect against a severe SARS-CoV2 infection. Even taking this into account, one than wonders why countries like Cuba, Greece, Finnland or Denmark, which have a very similar population genetics as the US, still show an 6 to 60 fold lower risk to dye from the virus than the US. The idea of a protective genetic variant among Asian people is further questioned considering that US americans with Asian origin are not less likely to develop a severe or fatal course after infection.

Some speculate that the low rate of fatal outcomes in East-Asian countries might be attributed to a baseline presence of cross-reactive immunity from a preseding infection with other, more common corona-virus variants earlier in life. If this is true, than at least the low death rate in Greece or Cuba must have other, more obvious reasons.

If you look on the bottom end of the rank list, where countries with the worst records of SARS-CoV2 fatalities group, you find that the US is in prominent company:

CONTRY       CONFIRMED DEATH DUE TO SARS-CoV2  (per population)

And except for Brazil, which is currently run by a government blinded by complete ignorance, the other for candidates in this sad group also have one thing in common:

Theese are the nations with the highest number of Nobel Price winners per capita for Medicine. Strange co-incidence ??   It just shows a crying discrepancy between the worldwide spendings for life science basic research and the achievements in our knowledge on the one side and the poor impact it has in the political handling of a mayor health challenge such as the coronavirus pandemic.

Posted by radius at 5:08 PM No comments: