Occasionally, when I go out late in the evening with our dog I used to watch in the sky westward, from where several times in the year the international space station can be seen when her trajectory goes over  Europe and it is just the right time between sunset and complete darkness.

One can either trust a program such as ISSTRACKER.com to find out the matching days in the year, or can just watch the sky every night hoping to catch the ISS by chance. This is what I did the day before yesterday, i.e. May 25th at about 9:55 pm (CET). And indeed, there she came, visible as a bright spot on a straight path, from the western horizon eastwards. But something confused me a bit, since this time the space station was not just a single bright spot (by eye) but in front of it (in about a distance 3x the size of the ISS) there was clearly a second, slightly darker and smaller spot visible.

First I thought that my eye vision was a bit blurred, so closed my eye and reopened it, but this secondary spot was still there. Then I suspected, that maybe it is not the ISS, but maybe a drone quite low in the atmosphere. But actually, drones usually never give such a brilliant white light. So at the end, I forgot about it.

Yesterday, I was talking to Leonard, our son, who as a physics student is always keen to find answers for tricky problems. First he suggested that this was not the ISS, but maybe some of Elon Musks Starlink satellites. But usually, they all have a very similar, small size. Then he quickly searched internet, and also considered that there was recently a rendezvous of Boeings Starliner capsule with the ISS. And funnily, this was exactly what I had seen (incidentally !!!). When we red NASAs log of the Starliner manouvers at ISS, it appeared that at 2:36 p.m. (or 8:36 p.m. CET) undocking started. For about one and a half hours, the ISS and Starliner were still close together (this is the constellation that I spotted at 9:55 p.m.), before a deorbit burn started at 4:05 p.m. (10:05 p.m. CET). Unfortunately, at this moment both ISS and Starliner had already disappeared beyond the eastern horizon, so only a potential observer further in the southeast Europe might have had a chance to watch it.

And this a view of Boeings Starliner, seen from the ISS in a few meters distance. It is amazing, that from the earth surface in about 408km distance, one can still identify it as the little satellite spot in front of the ISS (picture above). 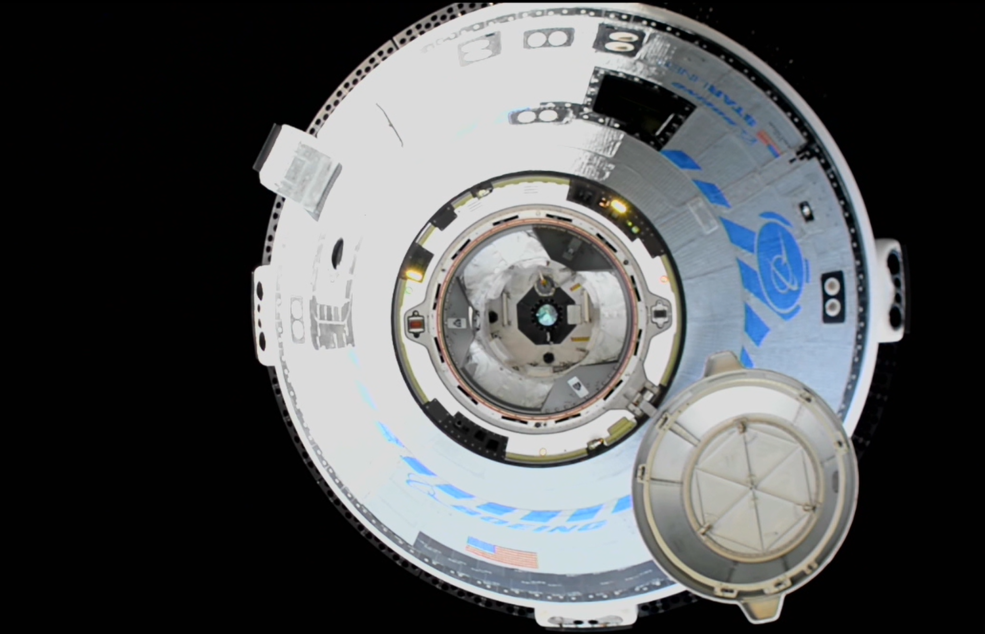 Apart from the nice visual impression that I got, it made me also to reconsider the probability to meet a rather unlikely event. To go out at night at the right moment to watch the ISS (about 3 x 5min long transits over Europe per night), the rare occasion to watch it as a bright object against the dark sky (only about ~ 10 days every year), and the incidental event that NASA and Boeing had scheduled the undocking manoevre right at this moment. It is really hard to calculate, but my guess is that less than a few 10s of people worldwide had watched this scene by chance just like me. On the other hand, probably hundreds of dedicated hobby astronomy appasionados with sophisticated equipment had already prepared their telescopes and cameras for this moment days before, and maybe cooled champaign and invited friends to meet this event together.