I went to the Bayerischer Hof Jazz-Club yesterday, listened to a funny band "Titus Waldenfels and friends" who played on weired instruments. But they had an amazing singer Julia Schöter from Freising. With closed eyes one could imagine it is Natalie Cole there on stage.
Every second song they played was about the Moon. Like "Paper-Moon", "Moon over Manhattan". It appeared, that it was indeed full-moon night, and therefore I did a foto of it (sorry, its a bid blurred, but I hope you like it anyhow.) 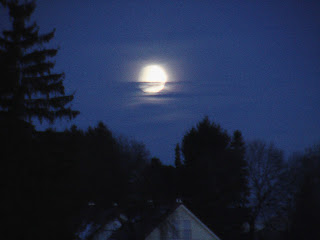 who was there at the club yesterday ?  Is the gigolo-type waiter still working ?  I remember when we went there on my last evening in Munich, it was nice Music, but only few guests. Is it always so empty ?

I think its is always pretty empty during the evening, when the live-bands play. Later at night, they switch to dance-music from CD and it turns more into a night-club. Than more people come, but this happens usually only at around midnight (We had already left then).  The personel is still the same, and they are so friendly and polite, even though they have to deal with strange guest (like yesterday, a middle-aged lady insisted she wants to dance bare-foot (!!). After two songs, she stopped to dance, toke her coat and wanted to leave the club (without paying her bill, but still bare-footed). Still, the waiter remained very polite.

Michael
Posted by radius at 9:15 AM