The genealogy of mice (part 2)

While searching for a paper that Matts recommended me to read about UV-repair, I found an article reporting a new study about the migration of house-mice throughout europe during the last 10 000 years. I remember you once wrote me a story about the colonialization of europe by the two mouse species M.musculus musculus (eastern-mouse) and M.musculus domesticus (western-mouse). Interestingly, this new paper shows that the western house-mouse travelled like a blind passenger together with the civilisations that managed to grow and store grains. And this started (you guess it) in Iran (and probably further east on the indian sub-continent). 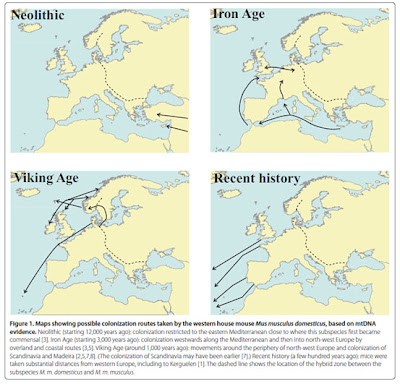 So you see, whithout the ancient agricultural developments in Iran, the progress in experimental genetics (including my MSc-project !!) which is so much based on M.musculus domesticus would not be possible. House-mice were known in Iran already 13 000 years ago. They arrived in Germany (including Neuherberg) only 3 000 years ago. Do you know, if the two strains that I studied in my MSc project  (the albino FVB and the spotted JF1) belong to M.musculus domesticus ?  Would be so nice for me to know, whether they are also descendents from the iranian mouse population.
Enjoy the winter time
TAKE CArE
/ghazal

PS: If you write about going-swimming these days, I assume you discovered a hot spring somewhere around Munich ?

Hi Ghazal, I very much admire that you spend some of the holidays to learn for your PhD project and - what is even more unusual - that you still find something exciting related to your MSc project (like the mouse colonialization paper that you mention above). It is interesting, indeed, not just from a genetics point of view, but also considering the house-mouse as a companion to the civilized men, that populated the world together. Have you seen the dotted line on the map, that runs north to south across europe ? This line as I wrote before separates the western mouse (M.m.domesticus) from the eastern mouse (M.m.musculus) world. We believe, it coincides with the cold-war demarcation line between the "socialist" eastern-europe and the "free" western-europe. How this co-incidence happened, nobody knows. Obviously, the mice were there much earlier (according to the study at iron-age), wheres human did the east-west-separation just 60 years ago (and it lasted only for 40 years).
The separation line between M.m.domesticus and M.m.musculus runs also along the Isar-river here in Munich. So during your staying in Unterschleissheim, you have been surrounded by the house-mouse, which as you mentioned above originated from Persia. What is a pitty, I think, that in Stockholm you are clearly east of the separation line, i.e. you now live in the world of M.m.musculus, which originated from central Asia (I guess mongolia).
These mice are known to be much more wild in their behaviour, unlike the FVB or JF1
that you worked with in your MSc project. Therefore, if you meet one in your house in Sweden or in the field, be careful. They wont let you do tail-clipping, ear-marking or measuring incorporated Iodine-activity as you did in your MSc project. They tend to have a much stronger self-defence instinct than FVB or JF1. Both are, by the way not pure M.m.domesticus strains. FVB/N is a laboratory inbred strain derived from hybrids between M.m.domesticus and M.m.musculus and contains alleles from both. JF1 was bred in Japan by fancy breeders (just as a hobby) and goes back to the mixed line of M. molossinus, which developed my matings of M.m.muscullus and M.m.castaneous.
Hope you are fine, Ghazal

PS: I have not discovered a hot spring here in Munich. Therefore, I go for swimming in the little river next to our house. But it has a constant temperature of 8 degrees celsius, which as compared to the outside -10 degrees appeares quite warm.
Posted by radius at 3:55 PM