Persian Cat rules its Empire from the Back of a Horse

While I have been away in the lab,  Shava must have found a link to your blog.  When she red the short profile of persian-cat.de, she first thought that your blog is all about child stories (o.k., I have to tell you that sometimes even your posts appear a bit fairy-tale kids-style to me !!).

Anyhow, Shava was surprised to read that the blog is a "dialogue between a cat and a mouse", and she asked me if this is part of the european and western idea that all social conflicts will eventually be settled peacefully and all creatures in the society will have equal rights to express their opinion ? She says in her opinion this is a big illusion, because there are natural differences between different people, same as there are natural differences between creatures. She came up with an old comic from her child-hood (Moosh o Gorbeh - موش و گربه),  which is about cats (persian) and mice (also persian). 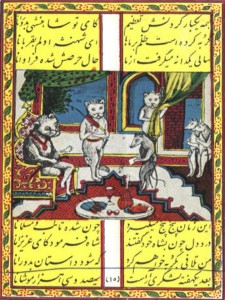 And here you see the reality: The last thing that a cat will do to mice is to have a long conversation with them about science or the meaning of life. If a cat does not eat the mice right away for dinner, it might "rule them" from its high thrown (perhaps only to keep the poor mice nearby and have it ready to be eaten for the next meal). 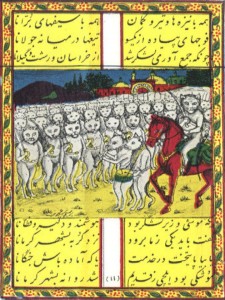 On the other picture from this nice old book you can see the typical situation in a "civilized society":  Those who are in power (the fat cat) can sit, and have their subordinates (the other cats) standing below them in rows, awaiting an order.

The picture we found at Shahre Farang.

This blog is phantasie, I agree. But my intention is just to defend the right of mice against the cats. A cats are widely considered a lovely pet, and benefical to man, whereas mice are always seen as vermin. But who (except us scientists) know how much the mice have contributed for the progress in bio-medicine ? Without mice, we would know very little about tissue- and bone-marrow transplantation. Our knowledge about the generation of blood cells and the regulation of the immune-system would be very basic. The first oncogenes involved in leukaemia and breast-cancer were identified in mice that developed a tumor. And the evolving field of stem-cells (which are the key for life of multicellular organisms) was 95% based on laboratory mice. As compared to all these achievements, the perception of mice and its role for mankind is too negative.  When Shava finds it strange that cats and mice could live peaceful together, she is absolute right. But I am wondering if the two could not have a distant dialogue, an exchange of thoughts ?  Couldn't it be that the natural relationship of a predator and its victim would turn into a intellectual partnership as soon as they are separated from each other ?

I like very much these old pictures from the persian book "Moosh o Gorbeh".  Too bad I cannot read the story in original persian language. But I found a german and english version of the book, by Farangis Yegane, who also draw modern illustrations for the book. I think I will read it on his website. In particular he announces a chapter where the mice plotted a rebellion against the cat.  I am really curious how they are doing this.