Watching my tomatoes now, 4 month after I starting them from seeds in early May, I realize that I have really neglected my blog without any obvious reason. Plenty of work is a bad explanation, I agree, since I never liked the idea to sacrifice everything in life for commitments at my job.
But at least for the tomatoes, there was not so much to report over the last month. They quickly grew, developed their defence against the snails, drank a lot of water (which unfortunately was abundant this year from rain), developed tiny, unspectecular blossoms, where the pollens managed to fertilize the carpels by wind or - most likely - assisted by our dog wagging his tail against them (I will soon write a wikipedia article explaining in detail "dog-tail pollination").
Finally, they all developed fruits, although only few of them fully ripened until now, late September. Although it is still sunny weather, I guess the riping program stoped because it is not warm enough any more in the morning.
Here are the pictures of the different variants. 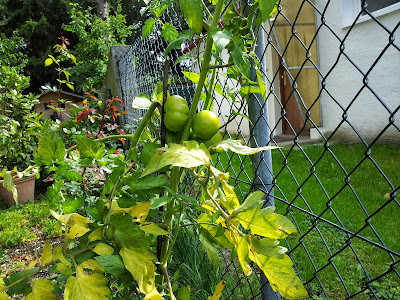 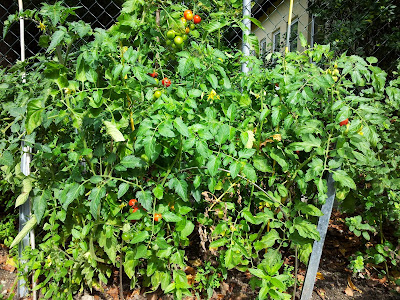 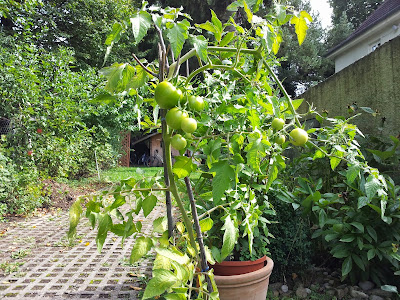 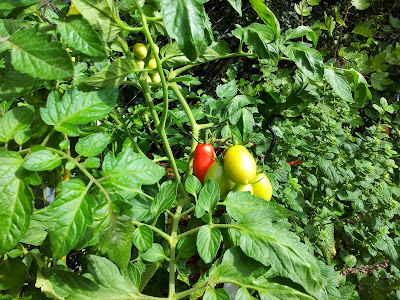 It's a pitty I started too late with the plantation this year (Early May). Therefore, although 2013 in general was a very good tomatoe year with almost no fungi or mold, lots of the berries remained green. I will collect their seeds for next years culture.
I was completely amazed to see that although all seeds I planted this year were pealed from tomato berries  bought in supermarkets or picked from restaurants salad bars, the new generation plants grew pretty strong and the fruits resembled to a large degree the shape and size of last years generation. I had expected much more deviations from the parental generation and more inbreeding surpression, because of the genetic shift in the F2 intercross and loss of heterozygosity.
The few fruits that became red now in late September were no doubts much more delicious than every tomato one can get in the supermarket.

The green ones from above turn red after 2 weeks in the house. Although they missed the sun during ripening, they still topped the standard supermarket tomatoes in terms of taste and varigation. 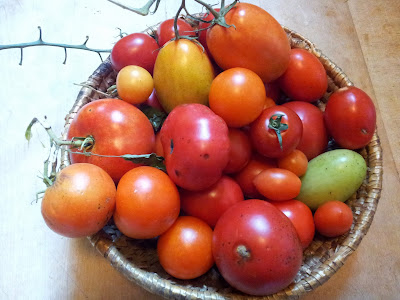