Next to our cottage in the Bulgarian Balkan Mountains (or Stara Planina) lives a three generations family. They are traditional mountain farmers, with goats and sheeps and a couple of acres land up on the plains. Always when I visit the village, I go over to Petars family to say Hello and to pay them for the expenses they have when they regularly having a look at our estate.
And as always, we are invited to spend at least one evening with them and eat the plenty of Bulgarian food and drink the home-made rakia.
This time they told us their recent experience with modern information technology and globalisation. Dijan, their 15 years old son like every typical youngsters soon became the family expert for all questions relating internet. He proved his talent and creativity by attempting to make some money from traditional craftswork of his grandma.  She is a still very powerful and healthy woman, and prefers to spend the entire summer season up in a sort of ermitage, about 1 hour steep climing 1000 meters up, where water comes from mountain springs, and the air and soil is simply as pure and crisp and pristane as on the first days of creation. She lives there for about 5 month, only from milk, cheese, and fruits, and to spend the time for something nice, she usually weaves a traditional type of Bulgarian rug (called Tcherga, see below) on an ancient weaving loom. 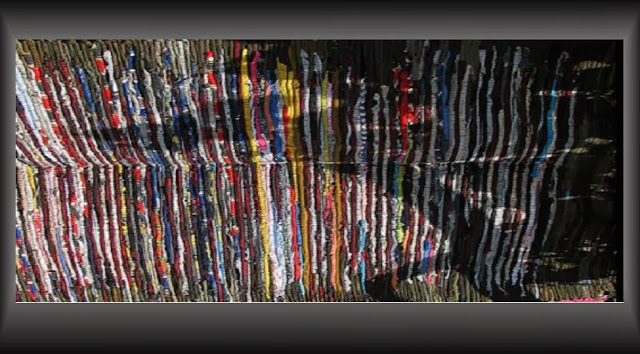 Like the socks which Penelope nitted while she was waiting for Ulysses, the carpet on Dijans grandmas weaving loom becomes longer and longer with the summer month' passing by. Early in September this year, when the family brought her back down to the village, she had produced about 25 m (!!!) of this fine, artisan rug, nicely rolled on a drum like you find them in highstreet carpet shops.
Nobody of the family spend any thought what to do with this long carpet, maybe they all assumed it will be a nice gift once the grandson is going to build his own house for his own family. Only Dijan himself, obviously just discovering the global potential of Ebay, had a sudden idea. He made a photo of a small piece of the Tcherga and offered it on the online shopping platform (for the price of 5 Leva or 2.50 Euro per meter !!!!). This would be equivalent of paying for 5 month of grandmas beautiful craftswork 73 Euro.  Even for Bulgarian standard, this would be a beggars salary, let alone the value of such a rare and talented piece of art.
So first we were laughing when they told me this story, and then to resolve the conflict between economic needs and the goal to properly evaluate talented craftswork, I paid Dijan the price of the entire carpet and demanded that the Tcherga stays in possesion of the family, as was grandmas original intention while working day after day on the weaving loom.
Dijans grandma was so releaved about this salomonic solution, that she asked me if I would except a Tcherga as a gift from her. How could I refuse such rare piece of artisan craftwork ?  And of course asking for the price for it would have been considered a personal offence. But I ask her that a 5 meters rug would be fine, since we dont live in a castle in Munich.