Well, other nations are involved in endless arguments about who deserves most credits for discovering the magic power of electricity. The ancient Greeks claim to have given it the name Electron, after they have noted that after rubbing amber with a piece of silk fabric the former will attracted tiny pieces of fiber (electrostatic force of differently charged bodies). Italians, however are convinced that Alessanro Volta and Galvani earn the greatest honors, since they firstly described electro-chemical potential and electro-conductivity by metals. Serbia, Croatia, Austria and Czech are still on a debate about which nationality the great magician Nicola Tesla, inventor of alternating current and of the principle of high voltage generation by electromagnetic transformers, belonged to. And of course the usual suspects England, Germany and the Netherlands earn the merits that great physicists from their countries, namely J.C. Maxwell, G. Kirchhoff and H.A.Lorentz, who formulated the electrodynamic and electromagnetic theories.
Bulgaria entered the row of great discoveries in the field only recently, when a poor tomato farmer found out that by the help of some scotch tape and iron wire from his goat fence he can make the electric power meter in his house runs slower or even stop altogether, while the entire household including his old fashioned Rakia distillery and a self designed electric red pepper roaster consumed almost unlimited kWh of energy. His patent application for this "custom designed electric perpetuum immobile" was not granted, but forwarded to the Bulgarian authorities for fraud prevention.

But beside of such rather questionable contributions to the progress of finding cheaper and environmentally friendly forms of energy, Bulgarian artists with their great sense of style, humor and beauty started some years ago an initiative to give the electric switch boards along the streets of the capital Sofia a new, eye catching design with added value for the community. Every year I visit the city and I am amazed by their latest electric artworks. 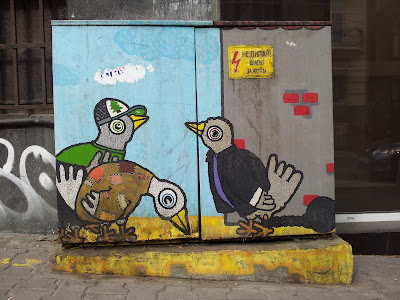