With the 2015 occupation of the Crimean Peninsula they earned world wide fame:  The little green man, than armed with AK47 and dressed in green camouflage forms. When asked by foreign reporters from where they are and where they are going, they insisted (with a waggish smile on their face) that they are from a nearby village and now on their way on a fishing trip.

Today, fortunately, Google made us aware of a much elder tradition of little green (and also red) men. Also from the Eastern part of Europe, they are on a totally peaceful mission as the little cartoon figures on the red and the green traffic lights in Germany. 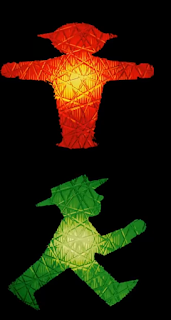 Today they celebrate their 56th birthday, and - as originally a pure East-German breed - would have to wait for another 9 years (till 2026) to switch from RED stop modus to the GREEN go modus. In 2026 they will celebrate their 65th birthday and would have benefitted from the than unique and generous law that with achieving retirement age, people became eligable to legally cross the iron courtain and explore the wide world.
But since the iron courtain came down in 1989 - the little green and red traffic light figures were in their late 20s only - they quickly took the opportunity and went West. A peaceful wave of immigration took place, and the green and the red fellows (the red is a girl, of course) not only gave an amazing example of successful cultural integration, but they had children and grand-children and thousands of great-children, who populated the traffic lights all over Germany. 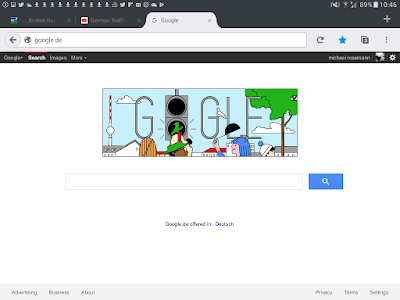 Please note the white peace dove that Laura Edelbacher has placed in her cartoon next to the traffic light. It is a clear sign that the little green and red figures are indeed on a pure peaceful mission.
The proportion of the little guys, however, seems to be a little bit distorted in this YouTube video. In reality, the two resemble gnomes (like on the photo on top), and are almost as wide as they are tall.