On Monday, National Geographic announced its new era of racial lucidity with a cover photograph of the English eleven-year-olds Marcia and Millie Biggs, apparently symbols of our post-racial future. Their matching dresses and long, flowing hair emphasize what can be determined from their faces: that these girls are sisters—fraternal twins. “They both have my nose,” their father, Michael Biggs, says in the story. “Marcia had light brown hair and fair skin like her English-born mother,” the article states; “Millie had black hair and brown skin like her father, who’s of Jamaican descent.” 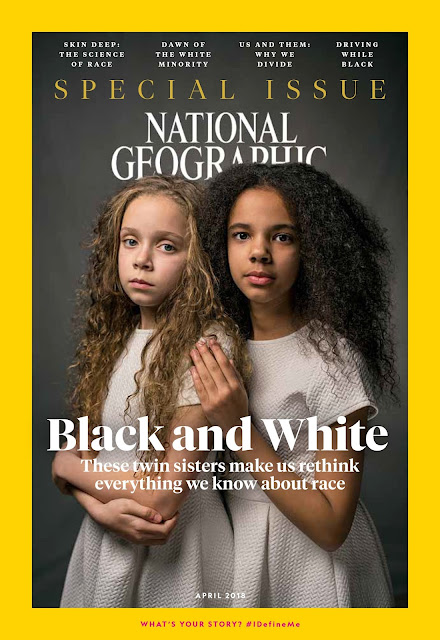 A statistical geneticist clarifies that it is not a rarity for one child to resemble one parent and vice versa; the issue’s abstract says that “race is a human invention,” and that skin color has misguidedly been used as a “proxy” for race. And yet the magazine cover undermines all of these correctives. “Black and White,” it reads, under the portrait of the twins. “These twin sisters make us rethink everything we know about race.” The online promotion is even more contradictory: “These Twins, One Black and One White, Will Make You Rethink Race.” The framing inspires the kind of coarse racial quantifying from which the issue is ostensibly trying to escape. Linking to the article on social media, several people observed that both sisters “look” black.
The concept of human races, and in particular the notion that hair color or skin complexion is a feature that reflect racial differences, is extremely weak and lacks any scientific base. A recent genome wide association study (GWAS) on about 2000 volunteers with all possible types and shades of body hair has shown that around 170 different genes influence its pigmentation from silver-blond to dark black. And the same is true fort the complexion of our skin.
Sometimes people think they could change their ethnicity by artificially altering their skin color. Michael Jackson and many people in India use various kinds of more or less harmful chemicals, virtually peroxide bleach  to make their skin appear lighter.
But there is also the case of a strange lady of pure caucasian ancestry, who was bound by the idea to become afro-american. For some time she even managed to be elected president of the National Association for the Advancement of Colored People (NAACP, after she excessively used UV and chemical tanning to change her face complexion to cinnamon. Rachel Dolezal even changed her name to the African sounding Nkechi Amare Diallo. In 2018, Netflix announced that they were making a documentary about her life; an announcement that caused some controversy.
Posted by radius at 5:05 PM