Without advocating a militant Green-Peace agenda and complaining about the modern society with its addiction to more and more convenient life style, I usually feel quite in good partnership with the world and nature. I hate fast food, burgers, any convenience food (because it usually tastes like shit), I use my bike to ride to work on 95% of the time of the year, and we heat our house with renewable energy (wood pellets). And of course as good citizens, we separate our domestic waste into recyclable and organic stuff.
So in general, I have little reason to feel environmentally guilty as a member of the developed world.
But today, while watching me most favorite news channel CNN, I nearly found myself sitting right in the dock accused of spoiling the world with a torrent of micro-plastic. They argued that one of the most ignored sources of plastic waste in the environment (and finally in the world oceans) is CHEWING GUM !!!!


Shit, I thought, now they got me. Since childhood I am a regular chewer, since I could convince my West-German uncle to regular send me Wrigley's Hollywood, Juicy Fruit or Fix and Foxy for doing something good to his nephews teeth. An estimated 50 years of regular chewing gum consumption, one 50 gram pack per day, would amount to a huge 900 kg mass. I guess one would need a truck to carry this away, and most likely the local EPA authorities would classify this as hazardous waste, and charge me 10 x times more for its removal than what it had originally costed in the supermarket. 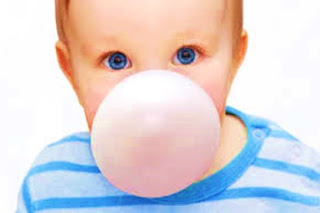 After sorting out what might have happened with 900 kg of chewing gum after I chew out all of the peppermint and juice fruit flavor from it, I realized that in fact I acted environmentally friendly right from childhood on, since I hated to spit out the chewing gum on the street or in the waste basket, but used to swallow it instead. So now the question arises what happened with 900 kg of chewing gum (which according to CNN is made out of synthetic rubber) in my stomach and further down the intestinal tract ? They argue that after it is broken down into tiny pieces, it accumulates in vertebrate organism such as fish or human beings. But this would violate the physical law of conservation of mass, since I myself weight 71 kg, and the 900 kg chewing gum must have left a trace. Without going much into detail, I also can confirm that no chewing gums ever left my body together with the other types of excretions. Not even the clinical analysis done during regular medical check ups gave any reason to suspect of micro-plastics in the various biological samples that I provided to them.
So it seems that our digestive system is able to degrade chewing gum completely and even turn it into something nutritionally useful. So maybe each pack of chewing gum should carry a warning saying: "To protect the nature from micro-plastic, please swallow the chewing gum after use".
Posted by radius at 11:20 PM