If our earth is going to disappear, I hope it happens as slowly as in the movie MELANCHOLIA

Hi Michael, not sure if I shall recommend you to see that new movie by Lars v. Trier "MELANCHOLIA". It started in Sweden already in May, but I did not had time before to go. It has some very beautiful scenes, in particular at the very beginning. It shows some moments in the life of the main character (Justine, played by Kirsten Dunst) in extreme slow-motion. It is so extrem slow-motion, that a blink of her eyes takes 2 minutes, and when she is doing a step forward on the field, this takes 5 minutes. It reminded me a bit what you wrote me last week, that my fear that time is passing too fast is a pure illusion. Because it is so subjective how we anticipate time, it is perhaps also possible to manipulate the speed of time.  You might even manage to slow down the speed of time, like in the movie.

Melancholia from Zentropa on Vimeo

But except for these first scenes, the movie becomes sad and tragic. It appears that the earth is going to collide with another planet, and all life will be destroyed. But Justine, who suffers from episodes of depression during her wedding ceremony, suddenly becomes very calm and self-confident when this huge planet approaches the earth slowly. All other person, who were initially the strong and successful ones, start to panic. 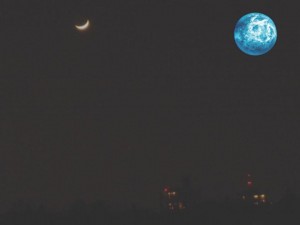