Bulgaria and Persia - some common styles in ancient arts

The ancient Bulgarians came to the Balkan peninsula from the south russian and and Kazakh grass lands, were they lived next to skyths. The Partians, i.e. the native persian people, came from the same area and from their brought to Iran the expertise of horse breeding and riding.
But the Black Sea basin, located between the Balkan peninsula, caucasus mountains, norther Anatolia and the Crimean peninsula, was perhaps the earliest site of neolithic settlements. Luigi Cavalli-Sforza, eminent geneticist, anthropologist and linguist located the site of the original proto-indoeuropean language there. An intriguing theory by Pitman and Ryan, based on geologic and archaeologic research even claims that the great deluge (Noahs flood in the old testament, but described much earlier in the epic of Gilgamesh) happened there at around 5600 B.C., leading to a migrational wave of the early agricultural settlements into various directions.
It is thus not difficult to understand that in Bulgaria some historical artefacts, that sometimes are still reproduced in common craftswork, resemble to a large degree the persian-sassanid style. 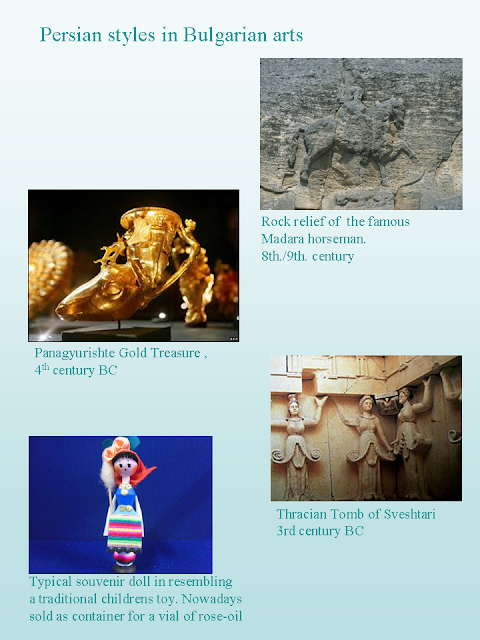