Hello Michael,
You have probably heard that last week a new mars rover landed succesfully on Mars surface, and how this event was enthusiastically wellcomed by NASA and the entire scientific community. It follows a long series of less brilliant failures to get a working mars robot up there, one that could produce more than just pretty pictures. This new mission of an explorer vehicle called "Couriosity" is officially intended to test the existence of lower forms of life on our neighbor planet. For this purpose, "Couriosity" carries on board a couple of sophisticated devices, some that can take samples from mars' surface or from deeper layers of the ground in order to apply sensitive detection methods for organic molecules, considered to be exclusively produced by living organisms. I am wondering if they are looking there for a sort of blood stains, or some traces of blond hair or spit-out chewing gum.
What makes this new Mars exploration so special (for me as a radiation biologist) is the fact, that the rovers energy supply comes from about 5 kg of plutonium 235, providing 120 W electric energy for at least five years. Thats fine, I would say from an engineers point of view, and I would also like to drive my old Benz with this sort of low-emission, low-cost and low-maintenace type of fuel.
But the radiation-biologist in me (and I hope you agree somehow) has to wonder about the long term consequences of 5 kg plutonium, a potent alpha emitter, if it comes to its mutatgenic effects on living organisms. Assuming the plutonium is accidentally released from the mars rover and evenly spread over the hypothetical mars ecosphere,  it would cause a tremendous rise of the mutation rate in all cells, whether low prokaryotes or in higher and multi-cellular creatures like plants or animals or anything else in between. This means the 5 years mission of the man-made Mars rover will not only explore the presence of live on Mars, but if there is any, it will also drive evolution by increasing the number of new mutants. So scientists will not only be the silent observers, but active players of an extra-terrestrial evolution of life. 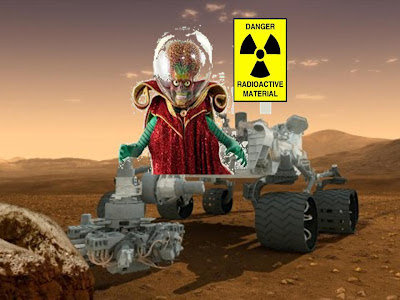 I am afraid, that with this man-made mutation burden, the mars creatures will indeed soon look like those in Tim Burtons "Mars Attacks". But for this, we have to blame nobody else than ourself.

I am more than worried now looking up the sky at night. There are not only beautiful meteor showers and the romantic moon, but from now on there might also be a laboratory of accelerated evolution on mars.

Take Care, yours sincerely
/ghazal
Posted by radius at 9:15 PM