The Moon -- one year later, but more than one year elder

Ghazal my dear,
What is age, and what is aging, if everyone uses a different measure for this. This came to my mind when I did another picture of the moon tonight. Tonight it was once again the night of the Persides meteor shower. But since nothing could top the spectacular meteor that we saw together with you at the same night in 2010, I put more attention to the moon again (1). A year ago at the same night, we have been at the Bulgarian blacksea coast, and then the Persides night fell together with the full moon. This year, however, the same day in the year (11th to 12th of August), the moon looked completely different. 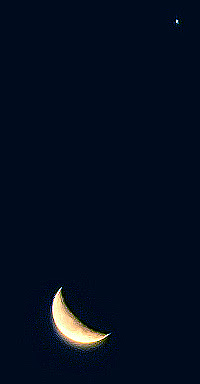 Its shape was already ascending to less than 25%, whereas full moon was already 10 days ago (exactly at August 2nd). So it is of some interest to understand why according to the solar calender exactly one year passed by (and even the Persides meteor showers declined to this (2), but the moon implies something different. As a proof, the picture on the left shows the shape of the moon as of tonight, and you can compare with the picture from a year ago.

The reason for this asynchrony is that the circular rotation of the moon around the earth and relative to the sun happens once every 29 days, 12h and ~4min. This means, that 12 month for the moon (or one year for it) take only 345 days, i.e. 11 days less than a normal year of 356 days. Therefore the full moon of August 2012 was visible 11 days earlier than the full moon of August 2011.

This means that for people who rely on the sun as their calender reference, a year has some 11 extra days, as compared to people who rely on the moon as a calender standard (like muslims). In the long term, after 33 solar years (which the western civilisation and the Persians use) an extra year has already accumulated for people in the islamic world. I have no clue if muslims indeed celebrate their birthdays according to the moons calender, and count one extra life year every 33 normal years. And it is not completely unlikely, that the processes of real biologically aging (or lets call it maturing) is influenced to some degree by the imagination of aging. Maybe somebody who really feels elder, if he or she suddenly discovers that instead of 33, he or she is already 34 years old. So therefore you might conclude (together with the early Beatles) that it is better to "....follow the sun":

Sun is definitely good for a couple of physiological functions (vitamin D synthesis, production of serotonin which makes us happy and satisfied), but in higher doses it is doing the opposite: You know better than anybody else how UV-A and UV-B can accelerate the entire aging process, since you work on this issue and even got a scientific price for this. The Isar island, where some black ashes might still mark the site of our camp-fire, and which looked pretty uncosy and barely populated three weeks ago, today saw masses of locals who followed the sun and took advice from the 1960 Beatles song, rather than from your 2011 publication in Mutation Research. 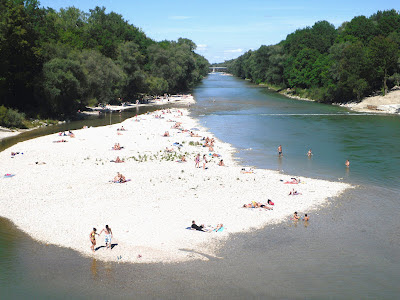 I guess that now you'd like to know why I waited for an entire year, before sending you another photograph of the moon again. The reason was that after the Persides night in Bulgaria last year, my camera broke. I somehow smashed the display, and from then on it was totally black. But I did not want to throw it in the waste bin right away, since this camera was always a brave and reliable companion to us. So I left it untouched on my desk, before in a quiet moment three weeks ago I started to take it apart (like I did it with your wrist-watch two years ago). I soon realized that the broken display can be removed carefully and replaced with a new one. And soon I found through Ebay a possibility to get even seperate display units for virtually every single digital camera. I quickly located a provider with the funny name of GLOBAL-SHINING (3). Mr. or Mrs. Global Shining appeared to be a Mr. Ho, living with his GLOBAL STAR SHINING in Flat S30 1/F, Shopping Arcade, Tsuen Wan Centre, Tsuen Wan, Hongkong (4). 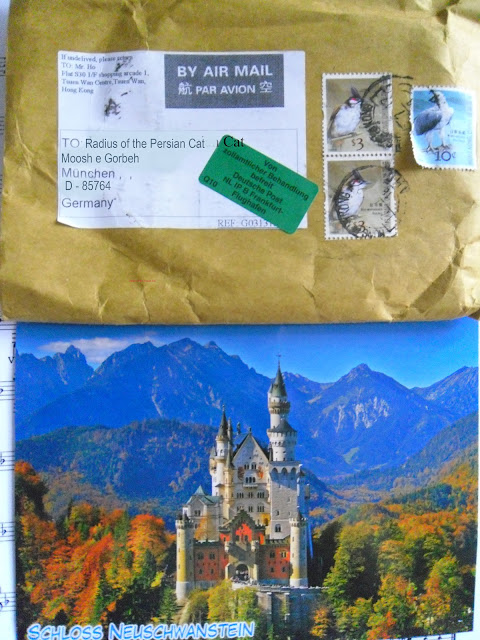 When I received Mr. Ho's delivery, the small parcell contained not only the brand-new Samsung camery display, it also had as a little extra a special screw driver (not only fitting the microscopic steel screws that held together the camera back, but also of perfect size for chinese fingers) and a handwritten piece of paper saying "Thank you for considering GLOBAL SHINING as business partner".
By help of the microscopic screw driver and some forceps from the lab I quickly managed to replace the camera display, and the pictures on todays post are the proof how well the whole camera is working again. Since I was so happy about revitalising the nice camera with the Mr. Ho's help, I decided not only to give him excellent reference points on Ebay, but also send him some words of gratitude on a postcard showing Castle Neuschwanstein. It is nice to imagine how Mr. Ho mounts the colourful postcard to the wall of his Flat S30 1/F in the shopping arcade of Tsue Wan, Hongkong.

Is there a final take-home message from this post for you, Ghazal ?
I hope you will find one.
Take Care my Dear


Footnotes:
(1) Surely you know that the Moon symbolizes the pure, innocent beauty in Persian classicla poetry. This is independent of the exclusive role of the Sun in ancient, pre-islamic Persian culture, philosophy and science. But because poetry is very much influenced by arabic traditions, their spiritual preference for the moon as symbol in religion and arts got access into the poetry of Hafez, Rumi, Atta and Omar Khayyun.
(2) The Persides Meteor shower lives up to its name: same as the Persian people do, it follows precisely the sun's calender. I guess that it follows in a precise and constant time after Persian Nouruz.
(3) Initially I could not figure out, if the name of the company GLOBAL-SHINING was referring to the moon or the sun. But now that I know that it is a Hongkong based company, I guess they even mean the Shining Stars.
(4) I guess Mr. Ho wont mind having his business address published here on my blog. But it might further promoted his excellent business. Just that Tsuen Wan does not have a postcode might discourage Hongkong tourists to drop into his store and buy camera displays.
Posted by radius at 9:06 PM