Hello Michael, So you think that posting photographs of food, half-eaten dishes from restaurants and so on blogs or FB (like I used to do) shows a lack of creativity, intellectual retardation and a developmental arrest at the oral stage ?  I have to admit, yes , I often post pictures of food to my PB pages, but usually they are either not yet touched (still in a perfect designed stage) or they are just decoration of a nice social company. You also had a recent picture with your colleagues in a restaurant, but this was either before you were served the food or you were there just drinking tea.
I'd like to show you an example that pictures made during lunch not always have to do with a "..retardation at the oral developmental phase", but that they can also be the demonstration of a intellectual dispute. Today, for instance we had "baked Salmon with boiled potatoes and salad" for lunch in our institutes canteen. When I was about to dissect the fish on my plate I suddenly discovered that it did not contain any fish-bones !!!!  (see attached photo). 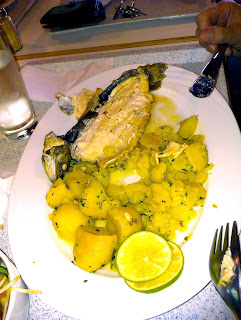 In the concept of darwinian evolution, the appearance of the skeletton was a major leap. And as we all know, Fish were considered the first species belonging to the group of vertebrates.
So how can it be that suddenly I catch an "invertebral salmon" on my plate ???  Could it be that this is a fake salmon, made by casting pangasius meat paste into a form that only looks
like a salmon ?

No, it is obvious, all vertrebrate fish are laboratory artifacts produced by pro-evolution scientist, whereas the one on my plate is a representative of natural fish.  Invertebrate Fish shows that darwinian evolution was never even a concept, but a product of a conspiracy.