This week the organisation "Mars One" announced that their call for applications to join the first manned mission to Mars was very succesful: Out of about 200.000 participants 1058 were shortlisted, for a final crew of 24 earthlings to build a new home for mankind on the red planet. The planed day 0 of this new civilisation on Mars should be in 2025 (1st of January, I guess for the Westerns, or March 21 for us Zoroastrians). 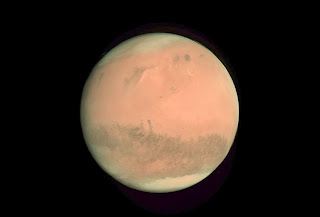 So the few seats on the spaceship are 8000 fold overbooked, what is amazing, I think, considering all the risks associated with such a cruise. In fact, I think the mission is more a crusade (with little chance to return home) than a cruise, were a traveller would make a lot of photographs to show them latter to the people at home. Most likely, they will never ever meet their friends and relatives back on earth any more, since the Mars One mission has no planned return function.
When you investigated the different options for an extra-terrestrial habitable planet, there were talks about water and a breezable atmosphere, green grass for the horses, but as you can see on the above picture of the mars, our nearest neighbor planet looks more like a desert. When you asked me to join you to Gliese 581g, I had in mind the pictures of Eleanor Arroway from the movie Contact, seeing her walk along the most beautiful ocean beach after being send to Vega using a relativistic space-time capsula.
I also like calm places to relax, like the heritable planet you were considering recently, or the planet in the system Vega where Elly Arroway went to. But a three years journey with 24 other space tourists, slandering day-in day-out, some of them already anouncing they want to travel naked, and or giggling teenagers - I can not imagine that this will be a joyful ride. I also checked the list of items which are permitted to take on this three yeras mission, and the items which are forbidden, and here it becomes really awful: You can take with you toothbrush, some chocolate bars (most likely Mars, but not Hanuta which I like so much), 5 containers sun-blocker cream (protection factor 200), 2 T-shirts, one pair of addidas shoes, and a WiFi-capable smart-phone. In total, personal luggage should not exceed 12 kg, i.e. you can not take a piano with you (maybe an accustic guitar), the horses also have to stay at home. The Mars One travelers have to leave behind their terrestrial existence like pilgrims do, and take on this journey not more than what fits into a city-bag. You perhaps remember the red suitcase (19.5kg they weighted it at airport check-in) I had with me when I arrived in Munich for the master project, and then I already had the feeling of missing too much of my stuff, even though it was only for a 4 month period. %nbsp;
Even if I would got used to all these limitations and inconveniences of the Mars One mission, there are also uncertainties about real health hazards. Recently you raised the issue of a potential plutonium-contamination of the Mars surface by the discovery vehicle, but what might be more serious is the unavoidable exposure of all space-passengers to the high-energy cosmic radiation, which during a 3 years journey would accumulate to several Gy whole-body radiation. Isn't that a life-threatening dose ? Even if the 24 passengers can avoid or cure any detrimental health effects to themself (by eating anti-oxidant containing functional food), the idea that they could ever ghive birth to normal children to buildt up an entire, healthy civilization is out of sight.
I never planed to become a funder of an entire new civilization, but I want to have at least one or two healthy kids. And I also want to have a lavish life with many shoes and clothes and a piano and horses and more cosmetics than only factor 100 sun blocker cream. I am therefore happy to stay on earth. It does not has to be Sweden, but there are quite many place on our planet which resemble Eleanor Arroways Vega beach.
best regards
/ghazal