Are the social media really social ??

Since the advent of the internet 2.0, the way we can exchange information in virtually real time and with every point on earth and with everybody in almost every country revolutionized the knowledge about our global world. Whereas in the past only a few large sources of comprehensive information dominated the world (like the Encyclopaedia Brittanica or the Big Brockhaus or the Encyclopedia Iranica and of course big publishing houses for fiction and non-fiction literature), each of which representing the general, expert approved opinion about our universe and our life and human history, this situation changed dramatically about 10 years ago. Nowadays, virtually everybody can write down and publish his very individual view about the state of the world, and appart from some funny conspiracy theoretics and creationists and health food vegans, this wealth of information contributed a lot to the real picture of our world. Whereas in the past, we could only read essays, articles, opinions by established authors, who made it onto the payroll of the Washington Post or the New Yorker and the like, the appearance of social media make sit easy now to follow the stories, the daily blogs, the political statements by complete unknowns.  Without this, we would have probably never heard of Marina Keegans "The opposite of Loneliness". Even books which later became bestsellers started as social media texts, "Axolotl Roadkill (aka Strobo)", "Work and Structure" byW.Herrndorf, "Super Sad True Love Story" by Gary Shteyngart or the notorious "Shades of Grey" novels.
But I'd like to understand to which degree the social media really fulfill a new social function. Are these social media really social ??

Since a couple of years I was following some interesting blogs, which I always enjoyed reading, even so they were updated only in a very irregular fashion, with some of them suddenly ending altogether. Since I was always dissatisfied, sometime even sad if a formerly active and inspiring blog writer suddenly abandoned its web diary, I tried to understand what are the motivations to write or what are the reasons to stop a blog. for this I did a sort of statistic analysis which shows, that there is a peak activity of postings in many blogs, usually at the 2nd and 3rd year, and than it slows down, gradually, and most of the blogs completely “dry-out” after 5 or 6 years. 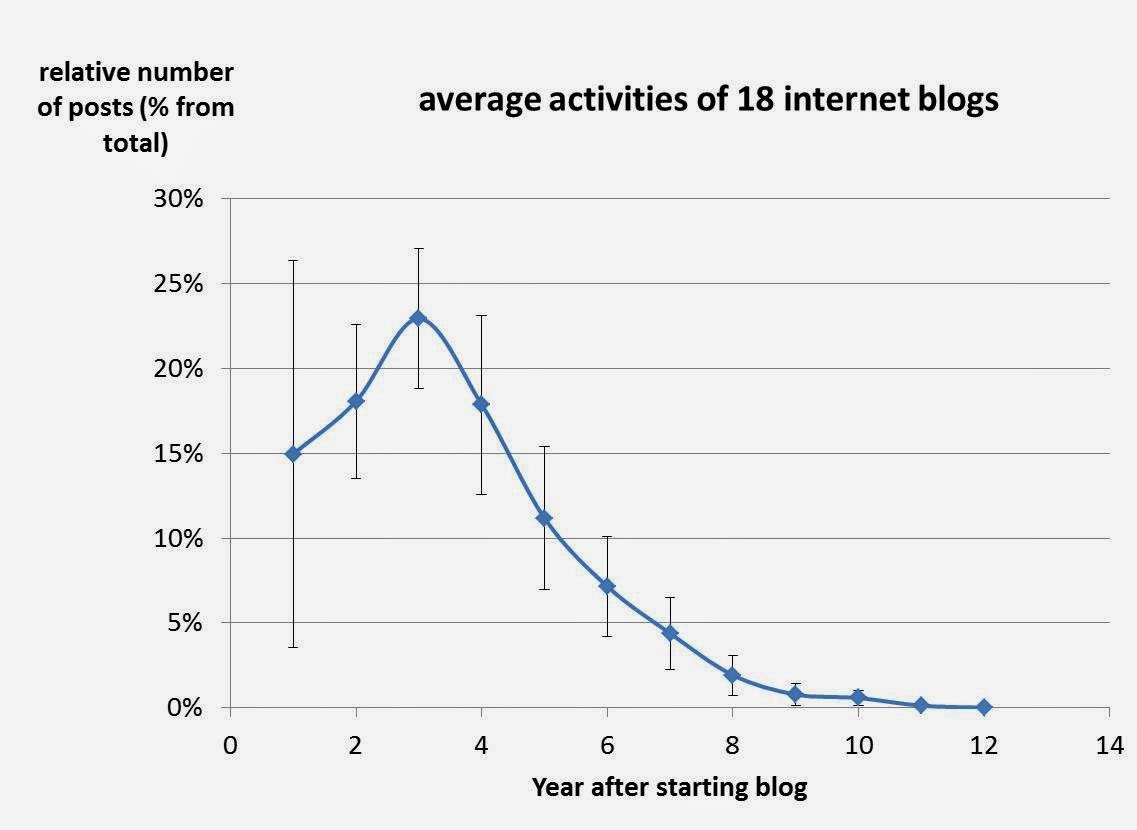 I also try to understand what is the reason for this ? is it that people changed their life situation such that too many new and “serious” commitments don't alowe them to write posts to their blog anymore ? In my eyes, that would be really sad and virtually indicating that their life situation has not changed for the better. But maybe it is that after many years writing a blog, and feeling too little response from readers, the writer decides to go back to the old fashioned way and write a paper diary ?

The list of blogs analyzed above contains classical types of web logs, diary stiles, daily observations and considerations about what the authors regarded as important from their very personal point of view. None of the blogs are of semi-commercial type, none are maintained by an editorial office on a paid base and none of them attempt to attract web-traffic to make money with banner ads. So in essence, these 18 blogs were set up and maintained by people who wanted to share their daily thoughts and opinion, without a commercial intention. And since all of them at one day or the other  appeared quite interesting to me as reader, I continued to follow them over several years. They were worth this, and I learned a lot about peoples life in other countries and other cultural backgrounds. But always, after a certain time, the frequency of their postings declined, not in terms of length, or quality or content, but simply in terms of the number of posts per month. After a while, several blogs became inactive at all, what I regret. On the other hand, there are many blogs around which are really boring, like endless rows of food pictures, travel pictures, celebrity news and so on. I just summarized my top-8 list of blogs I would ban from the internet, in case I would ever become the WWW-Inquisitor. You can have a look here:   http://brokenradius.com/2014/03/03/blogs-i-recommend-to-de-follow-immediately/

But I like to understand what makes people, who over some years wrote interesting and relevant articles in their blog, slow down their activity or stop sooner or later at all. There are some trivial possibilities:  It could be that somebody died (I hope that it does not happened to any of the authors of the above list of blogs).  It could be that people usually start writing blogs at a particular period of life or age, for instance when they leave their parents home and enter college or university, therefore spending many evenings alone in a students dorm or a privat appartment. If this is a motivation to start writing a blog, than it would be logical that after about 5 to 6 years they are about to finish this period of life, they are about to find a fix partner or even marry and live together. Maybe this is a critical time for the long-term survival of a blog. Maybe spending most of the time in a domestic environment with a fixed partner makes the blog of a person recieving lower priority. So this would imply that the near-field social interaction (i.e. with one or several persons in physical vicinity) suppresses the social activities via the electronic social networks.
But there is one aspect that I found most variable among the blogs listed above: the degree of social interaction between the blog owner (or the main author of the blog posts) and his followers or commenters.  In general, each of the blogs allowed the readers to submit comments. Some of the blogs publish all comments. Some of the blogs publish only comments selected for relevance. The really active and socially responsible bloggers even reply to readers comments, sometimes with a lenghty answer, sometimes with a short "Thanks for the valuable remark".
Some bloggers have the comment function by default set to "Show comments without approval by blog owner", but they actively delete comments later on, based on an unclear selection policy (nationality, language, religious or political statements in the comments).

My initial assumption that blogs "dry out" over the years if the blog-author does not feel any response from readers appeared not to be true. I know of blogs which publish very witty and long posts continously over a long time, without ever receiving much response from readers. On the other hand, there are blogs which had a very vivid discussion from readers following each post, usually with very interested and polite readers, but still the author decided after some years to stop maintaining and updating the blog.

So I have to admit that I did not find a conceivable explanation as to why some blogs are maintained for a long time, and why some are doomed to die too early. As in epidemiology there are always two possible factors causing a blurry observation:  Either unknown individual differences (maybe not genetically, but in terms of mentality) or several external factors that act together (i.e. change in living situation + change in personal status + inadequate response from readers).
The good thing is, however, that usally blogs stay in the internet, even if the author has abandoned it for a long time (unless the blog is on a paid server space). So the wealth of information which tells us and maybe later readers about peoples observations, experiences and opinions from all over the world remain available.  We should not underestimate the value of the social media correspondences, all these splinters of informations from ordinary peoples brains for later generations.  The sumer of ancient Mesopotamia would have never predicted that the cuniform account lists they once wrote on clay tablets help the historicians in the 20th century to learn about these 3 000 year old civilization.