This planet could become our future home

Since the first hominides climed down from the trees in the east-african savanna, they began to search around regularily for potential better places to live. So they first entered the Middle East, where they split in several groups, disagreeing whether the North-Western route towards Europe or the Eastern towards Asia should be taken. And the story continued, making mankind the most mobile species on earth, virtually driven in a restless move on the hunt for the even-better, even-cosier and even warmer home. Have they found it, this place where they feel finally perfectly at-home ?  Does not seem so. And even worth, currently many places on earth which for some centuries were quite habitable and convenient undergo changes related to the global warming that could soon make them again regions of massive emmigration. Rises of the sea level, landslides following alterations in the geo-hydrology, extension of steppes, droughts and devastating forest fires increase in frequency and in severity, making more and more people looking for a safer place. But where are these safer places, for an ever increasing world population ?

And we also have to seriously consider the future developement of the biomedical research and technology to overcome disease and death, virtually trying to extend human longevity further and further, heading for eternal life. So the natural question will be where shall all the people live in the furture, where could additional habitable space be conquered.  One is for sure:  Our earth' surface has a very limited size, and building more and more into the 3rd dimension as tried by the super-skyscrapers in Dubai, Abu-Dabi, Singapoor or Malaysia is no solution. 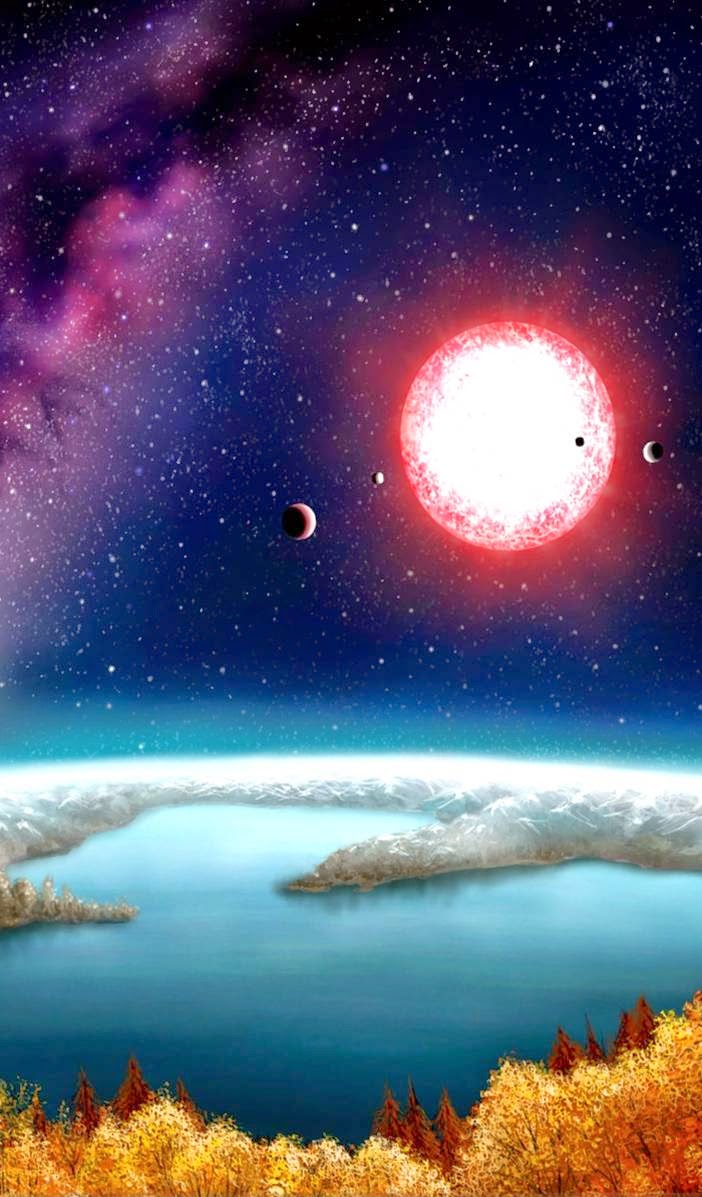 However, the idea to move away from our flat Earth' surface goes into the right direction, but we have to extend our vision from global to universal. During the last few years a new branch in astronomy and astrophysics evolved that by using highly sophisticated instruments is able to identifiy and study extra-solar plants. The spectroscopic techniques are so sensitive that even the atmospheric conditions at these "Exo-Planets" can be estimated. Together with the planets size and mass this allows to evaluate the "habitability" of the candidate planets, virtually meaning not only how likely it is to find primitive or higher forms of extra-terrestrial life there, but also how could would be chances to settle a permanent outpost of our human civilization there. The latest and most promising candidate for a habitable planet is Kepler186f.
The discovery, announced on Thursday, is the closest scientists have come so far to finding a true Earth twin. The central star around which Kepler 186f rotates is located about 500 light years away in the constellation Cygnus, is smaller and redder than the sun.
Kepler 186f is the star’s outermost planet and receives about one-third the radiation from its parent star as Earth gets from the sun, meaning that high noon on this world would be roughly akin to Earth an hour before sunset, said astronomer Thomas Barclay, with NASA’s Ames Research Centre in Moffett Field, California.
The planet is at the right distance from its host star for water – if any exists – to be liquid on the surface, a condition that scientists suspect is necessary for life.  “This planet is an Earth cousin, not an Earth twin,” said Barclay, who is among a team of scientists reporting on the discovery in the journal Science this week.
I am happy that I have not applied yet for the no-return journey to our neighbour planet Mars, considering that the living conditions there seem to be much worse. So I better wait for the first available space-ship heading for Kepler 186f.  According to the phantom artists impression of its surface as shown on the above picture , it must be a quite nice place. With its autumn leaves, the lake and snow covered mountains in the background it reminds me of the alpine landscape south of Munich or the alpine lakes in Swizzerland. But I hope that once human arrives at this pictoresque scenery at Kepler 186f, they are wise enough not to implement the stringent system of laws and legal constrictions as on earth, but at the same time are intelligent enough not to damage the planets eco-system.