At a recent discussion with a couple of friends who - like ourself have mixed ethnic background - somebody came up with the remark that he is one third Polish and two third French. The others nodded with appreciation, perhaps considering that 1/3 might contribute the braveness of the Polish military to fight for their independent nation, 1/3 French provides the beauty of their ladies and 1/3 of course would be the French cuisine, making a 100% perfekt person.
But as a geneticist, I tried to sort out how 1/3 versus 2/3 inheritance might happen. For sure, not on the generation of your parents. Since one definitely has only one dad and one mom, one can either be 100% of one ethnicity (if both have the same ethnic origin) or 50% this and 50% that. On the previous generation (with 4 grandparents) one could be anything of 100%, 75%, 50% or 25% of a particular ethnicity. And with each generation the possible frequencies become more and more.
But if one counts back more and more generation, will there be any stage at which exactly 1/3 (or 33.333 ...%) of the individuals of that generation could represent one particular ethnicity ?  The question therefore is if the number of ancestors in any one generation can be devided by 3. 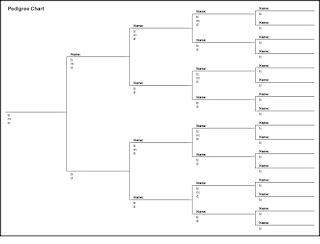 But in mathematics, suggestion is virtually of no value at all. Only strong and formal evidence counts. This is perfectly right, since when suggestive conclusions would be allowed in mathematics, this science would have long ceased to exist. Any error in precision and in the formal correctness in mathematics would have sooner or later "contaminated" the entire discipline and cause erosion of its basis.
But in our case, the formal prove that neither of the ancestrial generations contains 3 x N people is simple. And honestly, here I understoud for the first time the purpose of Prime Factorization. It is a key method in number theory, and became recently of great importance for digital encryption.
The background is that any positive integral number can be written (in a unique way) as a product of prime numbers (or their powers). It is easily done by hand, for small integers (up to several hundreds) using a recursive algorithm (see here for an web-based calculator). But even using powerful computers, prime factorization for big integral numbers requires exponentially increasing computing time. Thats the reason why with longer encryption keys one virtually make any attempt to break an encrypted code using computers useless.
What has prime factorization to do with our initial problem of finding out if the number of people in one particular ancestral generations is a multiple of three (or can be devided by three) ? This problem is equivalent to the question if a 3 (prime number) is part of the prime factorization of the number of people. If we look to the number of 33.554.432, i.e. an 8-digit integer, than solving this task by hand (using recursive trial devision) would take us several days perhaps.
But in our special case there waits great help, thanks to our logically working brain. All the numbers in the above tables second column (the members of a specific generation) are simply powers of 2 themself (2, 4, 8, 16, 32 and so one). And primer factorization of an integer that is a power of two simply gives back 2 power N. There will never occur a 3 or any other prime number. Hence the number of people in each generation can never be divided by 3 (or by any other prime number or products of any other prime numbers).