Bad Deals: ME countries attract islamic extremists and export their educated to Europe

Since the large wave of war refugees from middle eastern countries like Syria, Iraq, Eritrea arrived in Germany, I have harsh fights with some people, usually colleagues or even friends.
The worst is a "professor" in my institute, whom I call a Zombie-Professor, since in his whole professional career he has not done anything a normal professor is supposed to do. He has not done a single lecture, he has not supervised a single master- or PhD student, he has never attracted grant money for a research project. He received his professor-ship from a mediocre university, simply by submitting a mediocre thesis. Since than (and perhaps for the remaining two years untill he retires) he spend a lazy life, like a parasite in our research center. He occasionally published some theoretical papers on subjects that nobody is interested and nobody can validate, not even himself.
He publishes about statistics of cancer after radiation exposure, but he has never heard that cancer is based on genetic alterations in asingle cell, he has never heard that cancer can be cured in about 60% of cases today and that there is a lot of progress going on using stemcell-therapy, gene-therapy and immuno-therapies. For him, cancer patients are simply number or even points in a graph. And as superficial he is considering cancer patients, he is equally stubborn about people emmigrating to Germany on their escape from war, terror and death. He insists that these people are treatening his life, that they cost to much and that they spoil the Western culture. I usually respond to him that people fleeing a life of war, religious terror and unfreedom will be much more loyal citizens in the West than he has ever been. None of them will be such a parasite as he always was, but they will accept hard and dirty jobs, just to ensure a better life to their families and kids.
And many of these people, although not granted a professor-title from a mediocre German university, have more education, culture and intellectual spirit than him. It is worth noting that there is even a converse migration stream since a year or so: homegrown islamic extremists from European countries (Germany, Austria, France, Belgium, UK) leave to join the IS war, and I hope that none of them will ever come back. But in exchange, the peaceful, educated, tollerant people from Middle Eastern countries, those with a good education and with the dream to build a better future for themself and for their kids, are risking their life to settle in Europe. For us and for them, it is a good deal.   For the countries they are leaving, it is a brain drain of their future intellectual generation.
POOR countries often complain that their best minds are draining away—and for the most part they are right. The poorer the country, the larger the proportion of inventors who push off. Between 2007 and 2012, for example, 86% of Vietnam-born people who filed for patents did so while working outside Vietnam. By contrast, only 8% of Norwegian-born inventors were living outside Norway when they applied for patents. We know this because of the remarkably detailed records kept by the World Intellectual Property Organisation.
This does not mean that countries will become more skilled if they prevent their most talented people from leaving, of course. Even if it were possible to identify the brainiest inhabitants of a country and take away their passports, they would not all become inventors. Some could end up sweeping the streets due to lack of opportunity at home. It is probably better to let them leave for countries where their talents are better used, and then try to entice them back (as China does) or at least try to persuade them to lend their skills to the country of their birth.
A scattering of countries sit some distance from the trend line. Small nations like Cyprus, Iceland and Luxembourg export a lot of inventors, given their wealth. This isn’t surprising: academic and business opportunities are generally fewer in small countries. Conversely, big countries like America and China send few inventors overseas (though India sends a lot). As is so often the case, Estonia seems to be doing its own thing. Surprisingly few of its inventors go abroad, given the country’s small size and middling wealth. 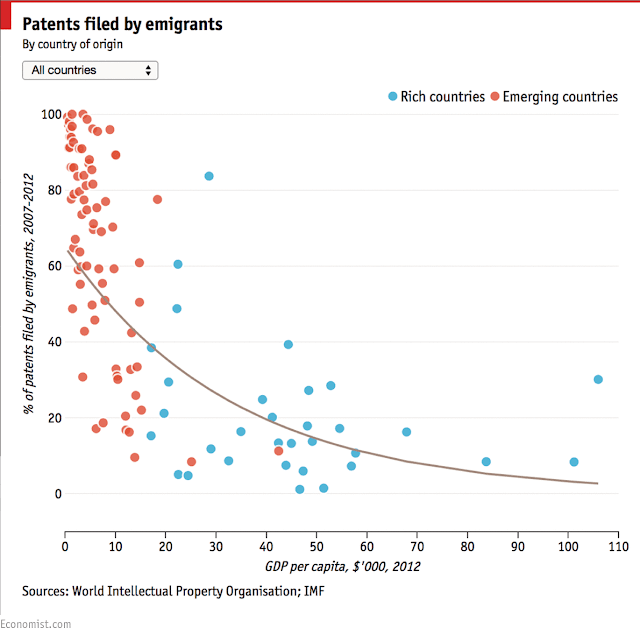