When parts of a larger system seem to follow their individual time. This can confuse a human being totally, since we got used to experience time as an absolute parameter. We can easily imagine that for instance different temperatures occure (like in the kitchen it is hotter near the oven than near the sink). But we simply can not imagine that time runs faster near the oven than near the sink. Imagine that the water drops from the tap falling down the sink much slower (like in slow motion) than the drops of water that fall of the tea pot. Sometimes such effects are exploited in computer-generated movies, such as "Inception", but also in TV commercials. Than one sees the main actor moving around in an environment where time is frozen to a single moment. One is reminded of brother Grimms fairy-tale "Sleeping Beauty", when the prince enters the hidden castle and sees everything has fallen in a hundred years lasting sleep. Not only all people and animals are sleeping, but even the flames of the kitchen fire have stoped instantly and seem to be frozen.

Whereas it is not so easy for us to fully understand the concept of physical relavity as discovered by Albert Einstein, it is easy to manipulate images or video sequences such a way that separate objects follow their own time schedule.

The image below, for instance, is composed of two photos.  The moon has been captured already 3 years ago, whereas the meteor (part of the Perseides shower) has been captures recently. 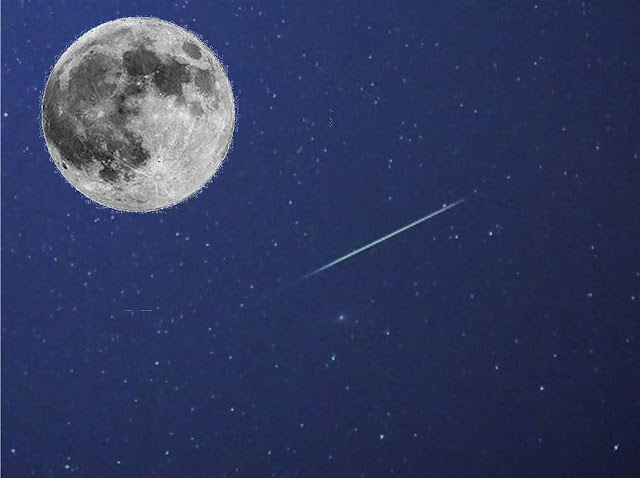