Don"t know were you spend the evening tonight, but I"d like to remind you of the Perseides Meteor Shower that is most prominent these days. I think to watch them is also a good remedy for the sadness that one usually gets before beloved people leave.
Every 12 years, the constellation of earth and jupiter is such that the orbital trace of the perseides is slightly diffracted towards the earth, and therefore further increasing the frequency of meteors that appear as bright tracks on the night sky. 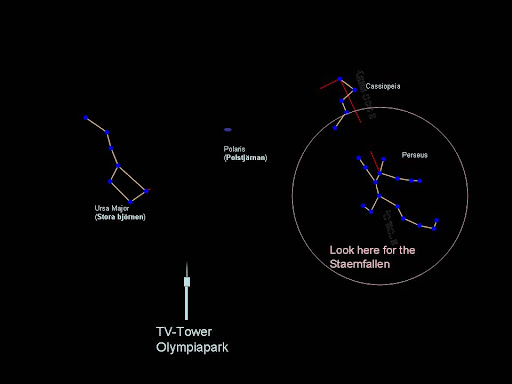 Since the next two days might be quite cloudy, I think tonight is the only chance to view the fallen stars (nice term, isn"t it. Maybe we can see fallen stars like Whitney Houston, Britney Spears or Mikey Rourke tonight, or Michael Schumacher, Maradonna and the like).
To be honest, a real Meteor is much nicer than these celebrities that greet us every day from the yellow-press.
To help you find the Perseides and have a good chance to spot some of the meteors, I made a scheme for you to get an orientation on the night sky.

First try to find the north-eastern direction . Then turn your head further to the right, untill you see somewhere a very prominent constellation of stars called Cassiopeia (like a hughe W on the sky). Below or slightly left of Cassiopeia (depending at what time at night you are there) there is the constellation called Perseus, and the Stjaernfallen should originate from this site.
As I told you, according to mythology, you can express a wish whenever you see a Stjaernfallen, but you should not tell anybody about it.