Astronomy in the Trump era

Here is what you get if a person that never in life red a book suddenly feels entitled to teach the public about what is right and what is wrong:

WASHINGTON (The Borowitz Report)—Attacking the media for its “very unfair” coverage of Monday’s solar eclipse, Donald J. Trump said on Saturday that the sun was equally to blame for blocking the moon. “The fake news is covering the eclipse from the sun’s side instead of the moon’s side, but if you look at it from the moon’s side the sun is blocking the moon’s side,” he said. “There are so many sides you can’t count all the sides.” Additionally, Trump tore into the sun itself, calling it a “showboat” for its role in the solar eclipse. “The sun thinks the world revolves around it,” Trump said. “Sad.” Trump said the sun was a “big problem” that his predecessor, Barack Obama, did nothing to solve, but that that situation was about to change. “It will be handled—we handle everything,” Trump said, adding that a preëmptive military strike on the sun was “very much on the table.”

On Monday, Trump had still doubts of the real possibility that the sun could hide behind the moon, and therefore he took a quick look to the spectacle - with bare eyes (who cares, if you are already politically blind). 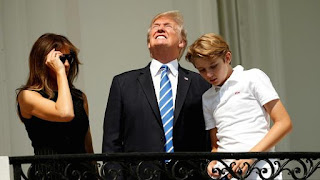 Maybe he has some unused preservatives in his bath-room drawer. In this case I could instruct him how to use them for building a pair of ad-hoc eclipse protection glasses.