Despite sharing a lot of its history with each other, vast cultural differences exist between Austrians and Germans. And a lot of them are reflected in a completely different meaning of certain words. A while ago, I received a written invitation from a local Tirolian-Austrian court, to report with them "to be executed". I replied that I have no intention and no time to be executed by them, due to private duties and an extraordinary big work load in our institute.
What was going on there at the Autrian court ?  Well, I had received a trafic ticket during a recent trip to Salzburg, and I failed to pay the fine. And when a sentence is administered in Austria, they call it "to execute". In Germany "to execute" means something like "to be put to death" (by hanging or electrich chair).

Another funny difference in using one and the same word is "Ausrasten".

This is how it looks when a German "ausrasted": 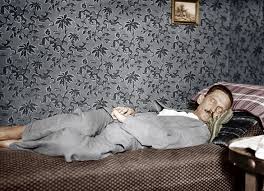 And this is how it looks when an Austrian "ausrasted":

Here, "Ausrasten" is used in the sense of "having a good rest"