Google today commemorates the 190th birthday of the German chemist J.L.Meyer. He studied the properties of all the (than) known chemical elements, and discovered a periodicity of them in relation to their atomic mass. For this, he coined the term "Periodensystem der Elemente (periodoc system of elements)". Well done, Julius Lothar, for this systematic and elaborative piece of work.  But another chemist, the Russian polymath Dmitri Mendeleev made the same discovery almost at the same time. He had his 186th birthday this year. We wrote down his conclusion about the periodicity of the elements atomic mass and chemical properties in 1867, in a two volume text-book "Principles of Chemistry". A few months later, Meyer published a paper with a revised version of his 1864 table, now including virtually all of the known elements at this time. This scheme was similar to the table published by Mendeleev. Meyer had developed his fuller periodic table independently, but he acknowledged Mendeleev's priority. Included in Meyer's paper was a line chart of atomic volumes as a function of atomic weights, showing graphically the periodicity of the elements (see below at Googles black board). 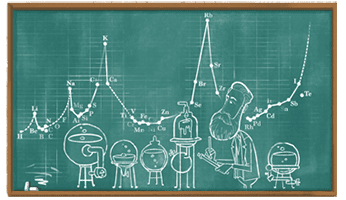 Considering that both scientists came to the same conclusion independent from each other, the Royal Society in recognition of their work awared both of them the Davy Medal.

Its good to know that in general, scientific research is still an area of life where people acknowledge the values of fruitfull colaboration, free exchange of knowledge and that finally the thruth will overcome all lies.

Working on stem cells and their role in regenerative medicine and therapy (for instance for MS, spinal cord injury, polyneuroptahies or arthritis), we try to find ways to 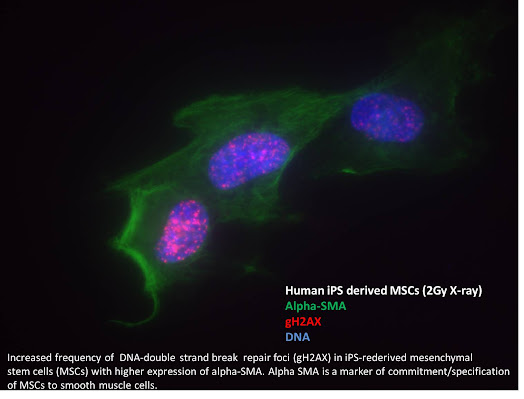 genetically engineer MSCs derived from patients such that they can be used to treat the damaged organ and recover its physiological function. The picture below shows such cells under the microscope, after staining them for proteins involved in mesenchymal differentiation and in DNA repair.  Everyone in the group is doing what they can best. Jing did the iPS reprogramming, Sarah did the X-irradiation,  Bao is very good in immuno-fluorescence microscopy.  And me ??  O.k. , I tell them jokes the whole day through and at the end of experiments buy ice-cream as a gratification.

Of course, I than have to write the manuscripts for publication, and fight with the editors.