Dear Ghazal,
On the occasion of the persian new-year, I”d like to send you some music.
Zoroastrian philosophy not only inspired Friedrich Nietzsche to write his central opus “Thus spoke Zarathustra”, but contemporary rock singers were equally influenced by this ancient faith. The idea that a divine spirit is present in nature, and it shows up in phenomenons such as fire or water had a renaissance in the era of new age and hippie-culture. Have a look at this wunderful piece of music by Arthur Brown (”I am the god of hell fire, and I bring you: FIRE”).
Arthur Brown, this very bizarre rock singer of the 70s considered himself a reincarnation of Zartosht (or Zarathustra). In the following performance Brown even tried to show up as Haji Firuz, the troubadur who ushers the persian new year with his songs and dances.


Dear Michael,
Well, this guy arthur brown really makes a very wild impression. I have never seen Hadji Firuz wearing fire on his head: usually he always stays above the fire. Are you sure that arthur brown has any relation to Zoroastrianism? I asked my mom about this, since she knows a lot about Zartoshd. Her comment was, that arthur brown reminds her more of the european carneval than on traditional persian Norooz. To be honest, I also saw people at last years munich carnival wearing costumes like arthur browns “Fire-Suit”. The whole idea of the persian Chahar-Shembeh-Suri (the night of the last wednesday before Norooz) is to jump over the fire but avoid getting touched by the fire. The red colour of his dress, however, is very Hadji Firuz style. It symbolizes the healthy and powerful new life of the new year. Therefore, on Chahar-Shembeh-Suri persian people ask:


Give me your beautiful red color
And take back my sickly pallor!

The music is not exactly the style I would listen to in the evening, when I seek for some relaxation. Do you remember the Paolo Nutini concert where we went last year in Munich ? This I liked a lot, it was also rock, but it was more melodic. It was really nice, and it was a very relaxing evening. Exactly what I needed so badly during all this hard work for my master-project. I still listen to his music from the CD, when I need some rest and inspiration.
Hope everything is fine with you. Soile was here to give a talk. She told me that you have very warm weather in munich now. Enjoy!
/ghazal
—————————————————————-
Ghazal my dear,

It is really already very warm here in Munich, 25 degrees, almost like summer. If I look out of the window, the cherry tree in front of the institute is in full blossoms. 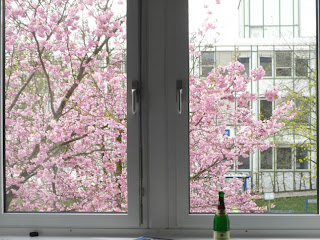 I already suspected that Arthur Brown”s wild habbit is not really your most favorite style. You always prefer “calm” music, right. But somehow I like him, even so he did not produce a lot of songs: he became more famous for his weired stage acts (always using fireworks). Once he even set himself on fire and had to be rescued by the security guys with a fire-extinguisher. Even more notorious became an incident at the Montreux Jazz Festival 1971: Brown again played around with some firework and set the whole Montreux Casino in fire. This whole story was quickly absorbed by the band Deep Purple, who within a day or so wrote a song “Smoke on the Water”. This immediately became a rock classic and climbed the top-ten for several weeks. And of course for the garage-band that we had just set-up with some school-mates in the late 70s, playing on odd east-german accoustic guitars to which steel-strings and DIY pick-ups were mounted and everything plugged into an old Wehrmacht vacuum-tube amplifier, of course this song (or at least the first few cords of it) was just the right one to annoy all the neighbours.

Hope you are happy, with or without me.
Michael

What a funny story to imagine that you played in a garage-band this deep-purple song. I thought western music was forbidden in the east ?  Was this what the neighbours found so annoying, that the young generation did not care any more about what is permitted and what is forbidden ? And you even had an old Wehrmacht-amp, I hope you at least removed the swastika from it !  Sorry, this sounds like you wanted to become the east-german version of "Rammstein".

Take Care
/ghazal
PS: Don”t know if I am happy. To know this exactly, one needs a measure. Somebody ones suggested that you are only happy when you don”t have to think about happiness.

Are you about to turn into a rock-fan ?  It would not be the first time that I see how a very elegant, educated and smart young lady from abroad suddenly outs herself as a Rammstein fan. But by the way, Rammstein ARE east-german. They were all playing before (in other bands) so-called polit-punk, and by this they did not only annoyed the neighbours, but the whole political system in the GDR. In terms of music quality it all was not really breath-taking, but it all had severe political implications. Very much the same as nowadays in Iran, as described in the movie "No one knows about persian cats".