In 2010 the world celebrated the tenth centenary of the completion of the Persian "Book of Kings". Composed of more than 50,000 rhyming couplets, the "Shah-Nameh" is one of the greatest epics in the history of world literature. It is approximately twice as long as Homer"s epics and 20 times longer than the german "Nibelungenlied". The Persian epic poem covers a phenomenal time span, telling the entire history of the old kings of Iran, from their mythical beginnings right up to the conquest by the Arabs in 651 BCE. The epic was written by the Persian poet Ferdousi (sometimes spelled "Firdausi", 935-1020), who by his own estimation spent 25 years composing the work before completing it in 1010 BCE and dedicating it to the Ghaznavid ruler, Sultan Mahmud (r. 998-1020). 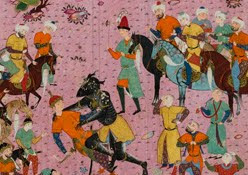 A Thousand Years of the Persian Book of Kings is held by the Museum of Islamic Art in Berlin and the Berlin National Library, to highlight the history of Firdousi's epic magnum opus and its significant role for the Persian national identity.

Shah-Nameh (The Book of Kings) is a classic among epic Persian poetry and recounts Iran's mythical and historical past. It was written in Persian at a time when Arabic was the main scientific and literary language of Iran.

The romance of Zal and Rudaba, the Seven Stages (or Labors) of Rostam, Rostam and Sohrab, Siavash and Soudabeh, Rostam and Akvan-e Div, the romance of Bizhan and Manizheh and Rostam and Esfandyar are among the most popular Shah-Nameh stories.

The exhibition, which will run until July 3, 2011, also displays a rich and extremely rare Sassanid collection of the Museum of Islamic Art, illuminating the historical past of the mythical legends, Artdaily reported.

Visitors will be able to see around 50 manuscripts and folios from the Keir Collection, the National Library, and the Museum of Islamic Art as well as medieval ceramics, textiles, metalwork, weapons, and artifacts from the Sassanid collection.

These are also works on loan from the Berlin Museum of Asian Arts, the Berlin Museum of Ethnology and the Deutsche Historische Museum (DHM) and two German private collections.
Berlin State Library's Oriental Department and the Museum of Islamic Art have seized upon the commemorations as an opportunity to illustrate the epic's influence in more than 100 magnificent objects, among them loans from the Museum of Asian Art, the Ethnological Museum and the German Historical Museum. The city of Berlin happens to preside over a unique collection of 'Shah-Nameh' manuscripts and single sheets, many of which rank among the most spectacular treasures of Persian book art anywhere in the world. Also on display are examples of decorative art that illustrate the epic's influence on the various areas of daily life in Persia. The exhibition provides profound insight into the world of the great kings and courageous heroes and illustrates just what a central role this piece of world literature plays for the Persian national consciousness, even today.