Where has my blood gone ?

Ghazal my Dear, Two month ago, in September 2012 Israel seemed to be the most relaxed and calm country one could imagine. Except for very rare security checks at the entrances of large shopping malls, concert halls or the Jad Vashem museum, there were hardly any signs of the immanent threat of violent attacks. As travelers we were more concerned about the possible failure of the air-conditioning in our flat, or about the trouble to release our car from the car-park that was suddenly locked on Sabbath. In an attempt to dissociate myself as far as possible from the tourists (many of whom visit Israel for its christian heir or because they come on a cruise with a one-day break in Haifa) I was lurking around Lev Hamifratz Shopping Mall. There, a memorial plate told that during construction of the mall in 1991 it had been hit by a scud missile launched by the lunatic Saddam Hussein. Some years later an attempted car bombing attack by the Libanese Hisbollah was prevented by police that sapped the vehicle on the car-park outside the building. This suddenly reminded me of an ever-present, albeit latent danger for life or injury in Israel, and this might to a certain degree prompted me to decline to the invitation by the Magen David Adom (the Israeli equivalent to the Red Cross) to donate blood right there at the shopping mall. 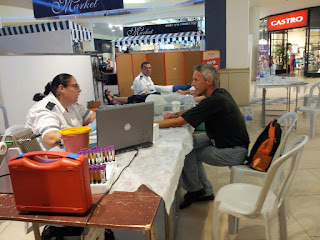 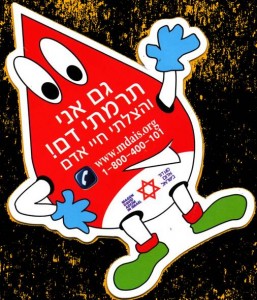 I never donated blood before, except when it was recommended before a surgery in hospital. When I laid down on this rubber-covered bed I had some time to talk to the doctor and the nurse about the most likely occasion when my blood (of course processed and perhaps mixed with a lot of Israeli blood to dilute out the Goi-factors) was used for transfusion. Anything could happen in Israel like anywhere else: car accidents, surgical operations with sudden complications, caesarian sections. The prospect of a military conflict was rather unlikely, two month ago.
Now, after Israel started its counter-attack to protect its people from the Gaza-launched rockets, it appears that victims of air-strikes, bombs or rockets blowing living-houses will be more likely to be in need of blood-transfusions. If my blood finds a way out of the deep-freeze storage into the circulation system of a patient, it could be a civilian who's house in Ashkelon or Ofakim or even in the suburbs of Tel Aviv were hit by Hamas rockets. It could be an IDF soldier who is about to enter Gaza in an attempt to neutralize the terrorists of Hamas. But most likely, it will be an innocent person living in Gaza, who has been misused by the terrorists as a living shield, who finally is be the most vulnerable and least cared-for victim. Israels IDF recently circulated a Twitter news promising that it will open the Gaza check points to permit delivery of emergency medical goods, maybe including my blood.
When I donated blood in September in Haifa, I had to fill in the form below, and of course without understand much hebrew I simply followed the suggestions of the Magen David Adom nurse and clicked any field she recommended to me. 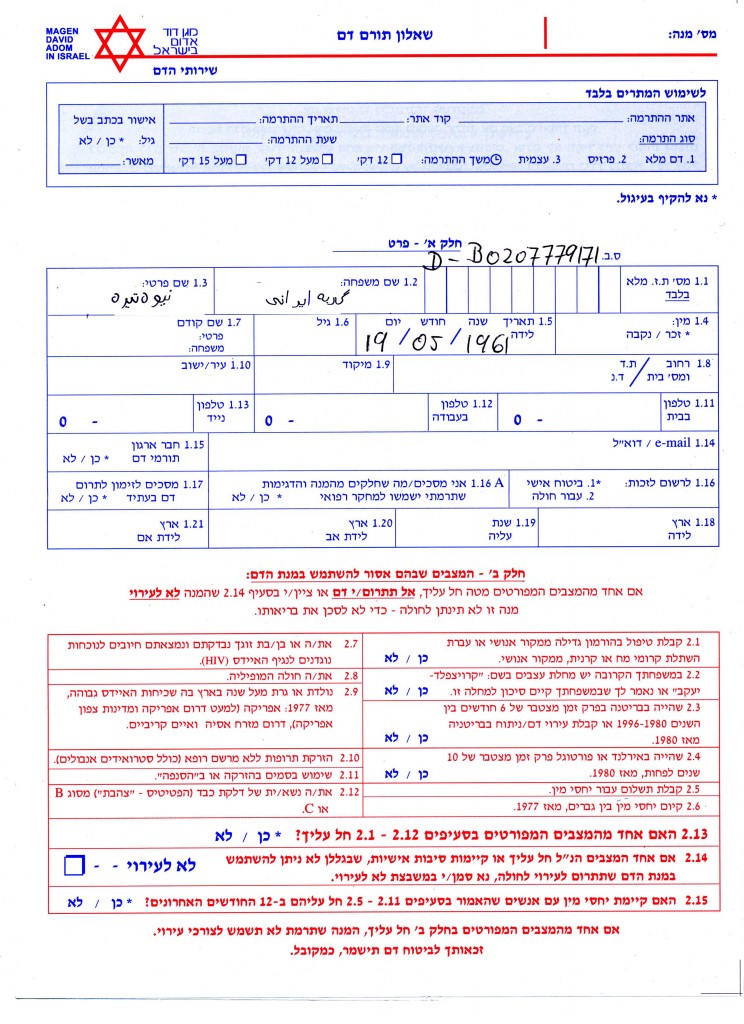 I did not asked her, if any of these fields to fill in were refering to the intended usage of my blood. Did it possibly exluded its use during military operations ? Or for certain minorities ? Or could it even be that non-kosher blood from a Goi like me would only be used to rescue non-Jewish victims ? Everything is possible, but I hope in the case of life emergency, people forget about race, nation, faith, and give the blood to those who need it most.
Posted by radius at 2:55 PM