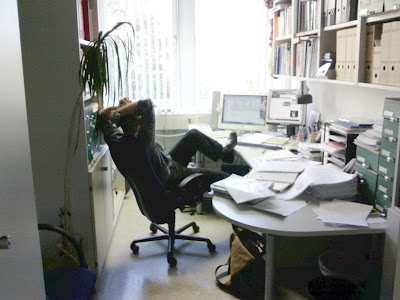 Yesterday evening I left my desk in the institute at about 7:30 pm. The last our I spend thinking of how to design an experiment to reduced the risk of mutations from cosmic rays. I thought I am pretty safe in the office from anything falling down, being it cosmic debris or terrestrial objects. On the left side you can see me still in a pretty relaxing mute. When I opened my office today at 8 am, however I was slightly speaking a bit confused. I only saw pictures like this one (below) in news reporting from sites of earthquakes. But there wasn't any earthquake in Munich since about 3 million years. It appeared, instead that 4 book shelfes (each weighting about 80 kg) came suddenly of the wall at night (they had been fixed there by our campus facility group by drilling some holes in the plaster-board). The occupational safety officer came around right away to document the event. He assure me that if I would have been sitting at my desk in the moment of the event, I could have been dead (I guess it would have been the first case in history that somebody had been beated to death by falling books).
When I removed all the debries I discovered that the computer had also been damaged, at least it lost power connection when the heavy bookshelf crashed on it (white large box). On its temp-file time stamp I could retriev the time point when the accident happend. It was exactly 11 minutes after I left the institute. So a few minutes later, maybe another 15 minutes more thinking in a relaxed position about the risk of cosmic debris, and I would have fallen on the office field of honour. 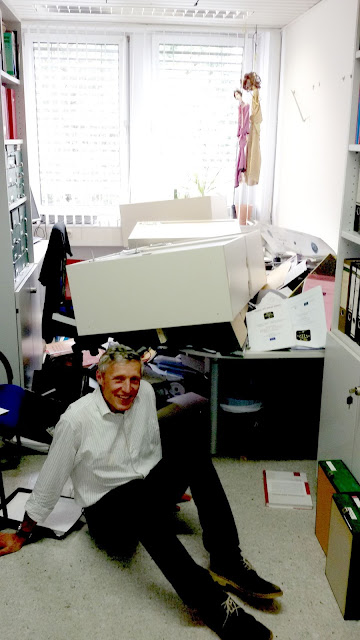