Is this Love or just Confusion (J.Hendrix) 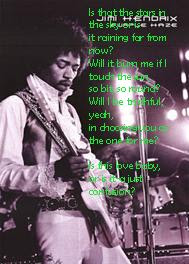 Over two month there has been a sweet illusion, that this illegitimite relation with Ghazal, a blue-eyed persian cat, could continue for ever. The two lived together for this limited time like a young girl and a young man, who were not sure yet about their feelings but who enjoyed every moment beeing together. Neither he nor she wanted more than just beeing together with the other, exchanging thoughts between a 49 old man and a 25 year old girl. The man with grey hair and beard was courios to hear, how the young girl responded to the funny stories. He wanted to know if his view onto the world can be understoud by a 24 years younger girl. And the young girl, the persian cat with the dark hair and the azur-blue eyes ? She was cheering him with words that, while they came from her lips, might mean a lot. He knew she was not a type of girl that was very generously expressing her feelings. He admired this a lot, since it showed him that she was not spoiled by the modern media-society with its desire to destroy feelings by spitting primitive words onto them. When she said that the lectures he gave were the only ones that she liked, but that she still finds it unusual to go out in the evening with her supervisor, these words sounded tender and he tried to understand what they really meant. He assumed, that this girl Ghazal, appearing to him alternating as a cat or an angel or a manifestation of extraterrestial intelligence, just enjoyed the feeling of being loved by somebody, even though this somebody has never mentioned the word "love". It is human nature, to respond if somebody showing you his love, does not matter if he is the guy that you always dreamed of. And it is cats nature to purr if somebody ruffles her fur.
They both knew instinctively, that this innocent love-affair, starting at 4 p.m. after work and finishing not later than 9 p.m. when he dropped her at the guesthouse and went home to his family, could not go on for ever. It still was a summer love, the deepest that he had ever went through in his life, even if it remained innocent and spiritual. He would have been ready, however, to throw away everything that binds him to his established life. A single sign from her side showing that she wanted to carry on, and he would go with her wherever she wants. He felt during these two month that the tender feelings for her, even if they were on an verbal and undecided state, released so much creativity and energy, that he was amazed about the spirit that was resting in his mind for perhaps to long. This was probably what was meant by "All you need is love". It means simply: If you feel your soul dried out out and your mind longing for a challenge, the best thing to do is to fall in love.
Surely, deeper under this innocent love-affair with its talks, walks, and drives to lakes and castles and shopping-mals, there might have been the desire for more. The password that he choose for the blog was not by chance "Ghazals Orchid". He gave her this marvellous flower when they went at his birthday to the Gasteig, to register her for the German-Course. Than he just thought that the rosa-white orchid might be a nice decoration for her appartment. But today he was sure that already then, 10 days after they first met, deep inside he had some erotic phantasies with here. And "Ghazals Orchid" is perhaps a very easy to decipher code for a particular part of her body.
Posted by radius at 12:52 PM